Fundraiser Jessica laces up for a ten marathon challenge 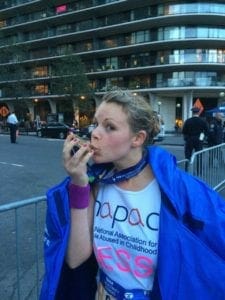 Many would view running a marathon as the ultimate test. But lawyer Jessica Standley is trying to go one – or rather nine better – by running ten.

Jessica, who is a personal injury specialist at Slater & Gordon, once said she had no interest in running. She is now midway through a challenge to complete ten 26.2 mile challenges in ten different countries. Inspired by watching a friend complete the London Marathon, Jessica entered a half marathon in 2012 and built her stamina up from there.

“I decided I wanted to run a marathon before I was 30,” she said. “I ran New York marathon in November 2015, seven days before my 30th. Having crossed the finish line saying I would never run another marathon, I’m not sure how the challenge then became 10 marathons in 10 countries!”

She added: “Through my work as a specialist abuse lawyer I have seen how the work of charities NAPAC (the National Association for People Abused in Childhood) and Wheelpower have helped people. Knowing that I am fundraising for them keeps me running. I just hope I can meet my target of £10,000.”

Jessica has organised a Black Tie Ball at the Nevill Golf Club in Tunbridge Wells on Sat 27 Oct 2018 to raise funds towards her £10K target. Tickets are £75 each and are available from 10marathons10countries@gmail.com

Gabrielle Shaw, NAPAC’s CEO, said: “We answer thousands of calls from survivors every year, but demand continues to grow, so sometimes people struggle to get through. We had over a hundred thousand call attempts last year. With the help of people like Jessica, we can expand our service, so when people have plucked up the courage to call, we’ll be there for them.”

Jessica, who has worked at city-centre firm Slater and Gordon Lawyers for eight years, says training is the hardest part. She added: “Fitting it around everything is tough. Marathon training requires dedication, motivation and determination – I even run to and from work sometimes but it is incredibly rewarding to get to the finish line.”

While braving heavy rain in Florence and soaring temperatures in Vienna has been tough, Jessica who has completed seven races so far, says raising money for a good cause is keeping her on track.

With a stress fracture caused by running on an already painful leg leaving her on crutches and walking in an aircast boot for two and half weeks, Jessica has used physiotherapy and altered her diet to aid her recovery. She should be running again in July and race fit for the Budapest marathon in October.