Abuse of children is never an easy subject to discuss. And when we are confronted with the fact that women can be abusers, it becomes exponentially more difficult. In some ways, it is an ultimate taboo – something ‘prohibited or restricted by social custom’. The problem with not confronting taboo subjects like female perpetrators is that the abuse is able to persist and the victims’ shame and guilt becomes more corrosive.

NAPAC exists to provide support for adult survivors of any kind of childhood abuse. Over the years we have had many thousands of both male and female victims contact our telephone support line or email support service to talk about their childhood trauma. And yes, it is not uncommon for people to talk about women being the abusers. Their mother. Stepmother. Sister. Grandmother. Female teacher or care worker. Cousin. Child minder. We know that abuse happens where power meets vulnerability, and both men and women who abuse have at least one thing in common – an ability to find vulnerable children and exploit them.

So, is there a difference in the types of abuse perpetrated by women, as opposed to male abusers? Exact figures are difficult to obtain – this is a hugely underreported and under-recorded crime. At NAPAC, by far the most common abuse perpetrated by a woman we hear about from victims and survivors is narcissistic abuse by mothers who habitually prioritise their (emotional) wants over a child’s needs. The next most reported is emotional abuse and neglect, followed closely by physical abuse, with the perpetrators typically being the mother and stepmother. Sexual abuse is mentioned as well, by male and female victims, the perpetrators being the mother, sister or female friend.

The effects of abuse perpetrated by a woman are multiplied significantly when the abuser is a mother. The instinctive response of many people and perhaps society at large is to think of mothers as naturally nurturing, protective caregivers. These gendered stereotypes are harmful and silencing, making it harder for victims and survivors of abuse to disclose. The confusion and feelings of revulsion when considering women abusers is a very strong reason that this is such an underreported offence. We often hear from survivors on NAPAC’s telephone support line that “no one will believe me…..she was my mother”.

Additionally, being sexually abused by a woman can cause hugely confusing feelings and immense shame. At NAPAC we hear of mothers perpetrating sexual abuse and callers – male and female – wanting us to validate whether it was actually abuse. This is because of the tactics used by female offenders are constructed to fit within stereotypes – saying things like ‘let’s see how developed you are’, using the excuse of health concerns, or sexually degrading children by requiring nudity around the home. Male victims of female abusers also report feelings of heightened confusion – hearing messages like ‘lucky boy’ from their peers and even adults when they disclose, entrenching the messages their abusers gave, especially as any physical reactions can more easily be misrepresented as consent.

NAPAC understands how challenging the issues of women perpetrating abuse are for survivors, and those supporting survivors. We have resources that can help work through initial responses and begin healing. Click here to go to our collection of online resources and click here for our guidance on managing flashbacks. 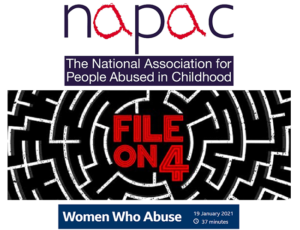 Producers spoke with experts from across the sector. NAPAC is one of the organisations featured in the programme.

The Netflix documentary ‘Tell me Who I Am’ told the story of twins Alex and Marcus, first broadcast in November 2019, survivors of abuse perpetrated by their mother. Click here to read NAPAC’s blog on the release of the documentary.